Here's a reference development workflow that is enabled by Hasura Cloud: 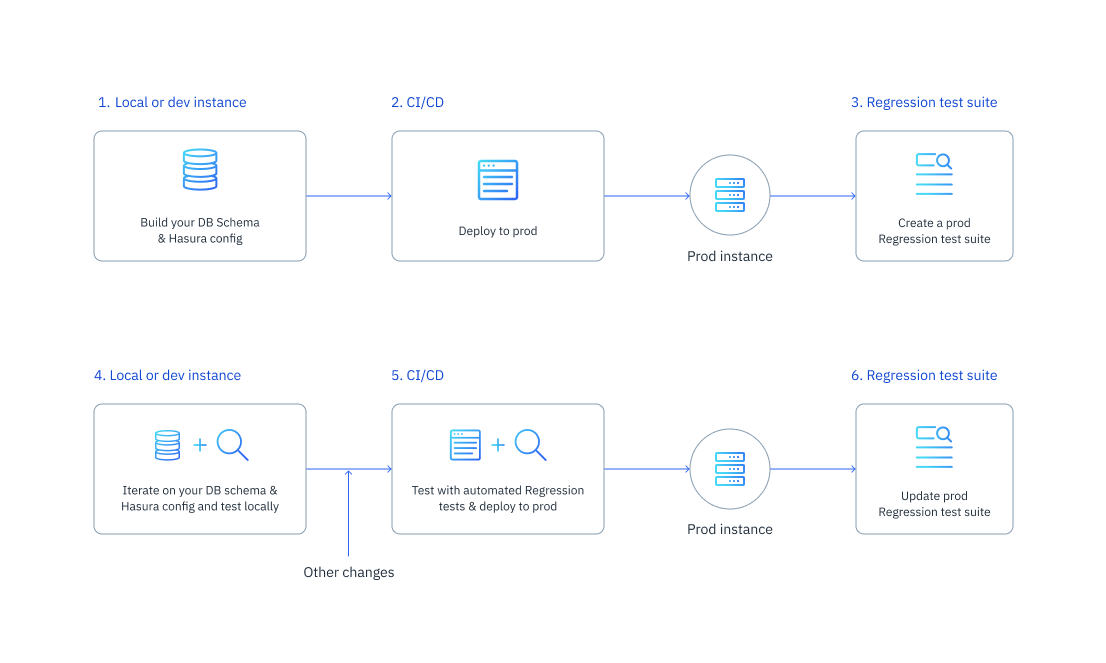 Each Hasura Cloud project can be configured with a separate test suite. Ideally, you want to create a regression test suite on an project which has received requests with operations you’d like to continue supporting or ensure are not “broken” - production or a shared QA project which receives operations in your app or, if you have a public GraphQL API, those from your consumers.

Add important operations to your test suite with one click by adding them from your project's operation history:

A good development workflow would require that tests be run 1) early in the dev process, and 2) automatically with changes, to ensure changes to the schema don't break functionality.

Let’s say you’re a developer iterating on a feature and, as part of your work, need to modify your Postgres schema or the Hasura configuration. It is likely that you are doing so by running the Console via the Hasura CLI to generate Migrations that you can version control. Before committing your changes in git, you should run tests to get an early warning for potential regressions. Your team may want to designate the test suite from your production instance (or a suitable alternative) as the default suite to be used for this, and you can choose to run this test suite on your local or development instance.

For example, if the column ‘title’ (in a typical authors and articles schema) has been modified as part of a feature iteration. Assuming the operation from the previous example is part of the test suite on production, here’s how the feedback on this change looks like:

As you can see, one of the tests fails because it expects a field, title, to be part of the type articles - which is something our proposed change just modified and removed support for.

This command will fetch the entire test suite from Hasura Pro and run the tests against given endpoint using the admin secret and report the result on the terminal. The test run and the results will also be available on the Hasura Console.

You can use the Hasura Pro CLI to programmatically trigger execution of a test suite in your automated testing setup, typically in CI scripts.

In order to communicate with Hasura’s APIs, the CLI needs to be configured with an API access token (which you can create via your Hasura Cloud settings). If you want to set the token up on a non-interactive environment, like a CI pipeline, you can obtain a token and then add to ~/.hasura/pro_config.yaml with the following format:

What did you think of this doc?