It is a typical requirement to run some custom business logic before actually executing a mutation / query, for example, to perform validations or to enrich some data from an external source. Actions can be used to achieve this.

To help with creation of such actions, Hasura lets you derive an action from an existing query or mutation by:

Hasura can generate the relevant GraphQL types required to define an action given a GraphQL operation.

For example, let's say we would like to derive an action from the mutation:

Now that we have a mutation with arguments being accepted as variables, we can derive our action:

Head to the API tab of the console and paste / generate your query in the GraphiQL window.

Next hit the Derive action button as shown below:

This will redirect you to the Add a new action page with the action definition auto filled.

To create the derived action, run:

This will open up an editor with metadata/actions.graphql with the following action types auto filled.

The action name will be picked up from the argument of the command and not the mutation string.

For a derived action, Hasura can generate the relevant handler code to delegate the action back to the original operation.

Head to the Actions -> [action-name] -> Codegen tab in the console

You can select the framework of your choice to get the corresponding handler boilerplate code. 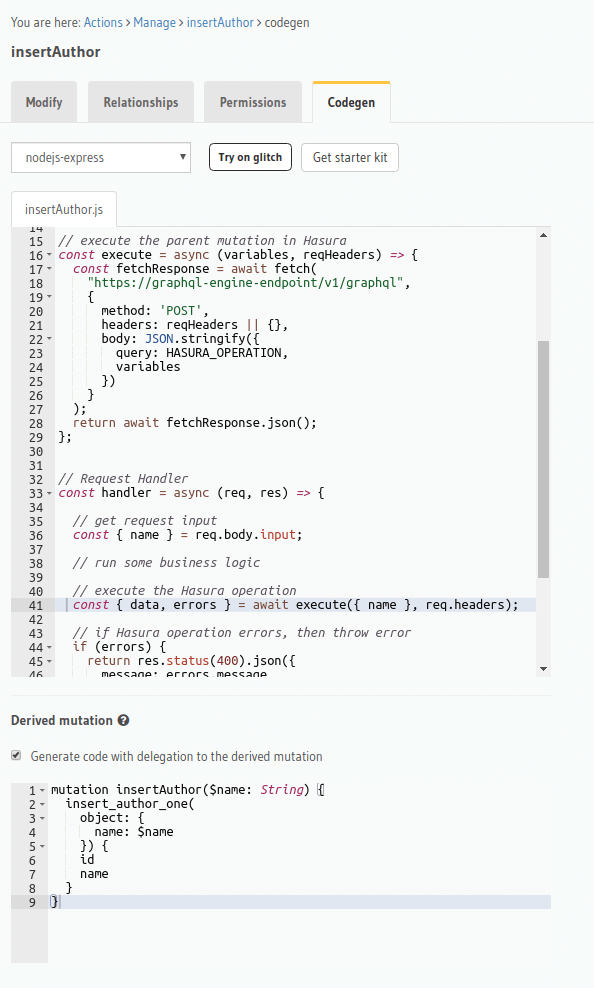 The information about derived actions are stored locally on the browser and hence it is currently only possible to generate the delegation code from the browser where the action was created.

The CLI does not persist information about derived actions. Hence if you wish to generate the delegation code, you might want to pass the query or mutation string while running the codegen command:

Hiding the original mutation in the API​

Once a mutation is derived, you might want to hide it from your public GraphQL API but still want to use it from your action handler.

To achieve this you can mark the mutation as backend_only so that it can be accessed only via "trusted sources". See Backend only for more details

Did you find this page helpful?