If you have a large amount of data, or "fast moving" data in Postgres, Hasura now allows you to instantly create an API for clients to fetch that data as a continuous stream. This API can be safely exposed to internal or external HTTP clients.

Today we have a variety of solutions to ingest and store a large amount of data or a stream of data. However, once this data has been captured, securely exposing this data as a continuous stream to a large number of HTTP clients concurrently is a challenge.

These are the challenges that Hasura aims to address:

Hasura's new streaming API on Postgres addresses these challenges so that teams focus on how their streams are modelled and secured instead of building and scaling the API. 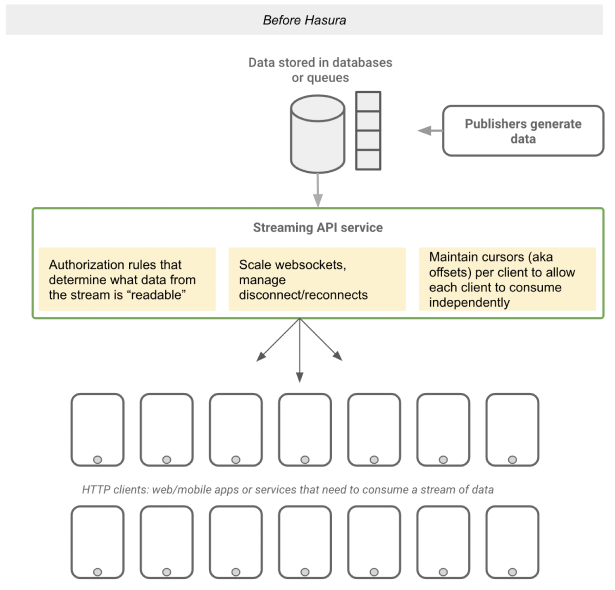 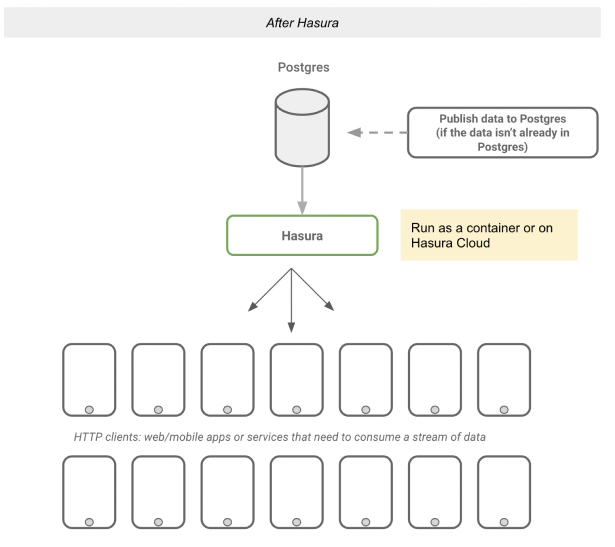 In this post, we will look at the architecture of streaming subscriptions, how our batching and multiplexing works with declarative authorization. We will take a look at initial performance benchmarks that test for high-concurrency and volumes of data. And finally, we’ll highlight a few common use-cases and modeling patterns.

Try it out in 60 seconds

Let's say you have log-like data that is being continuously generated and needs to be streamed to web clients. 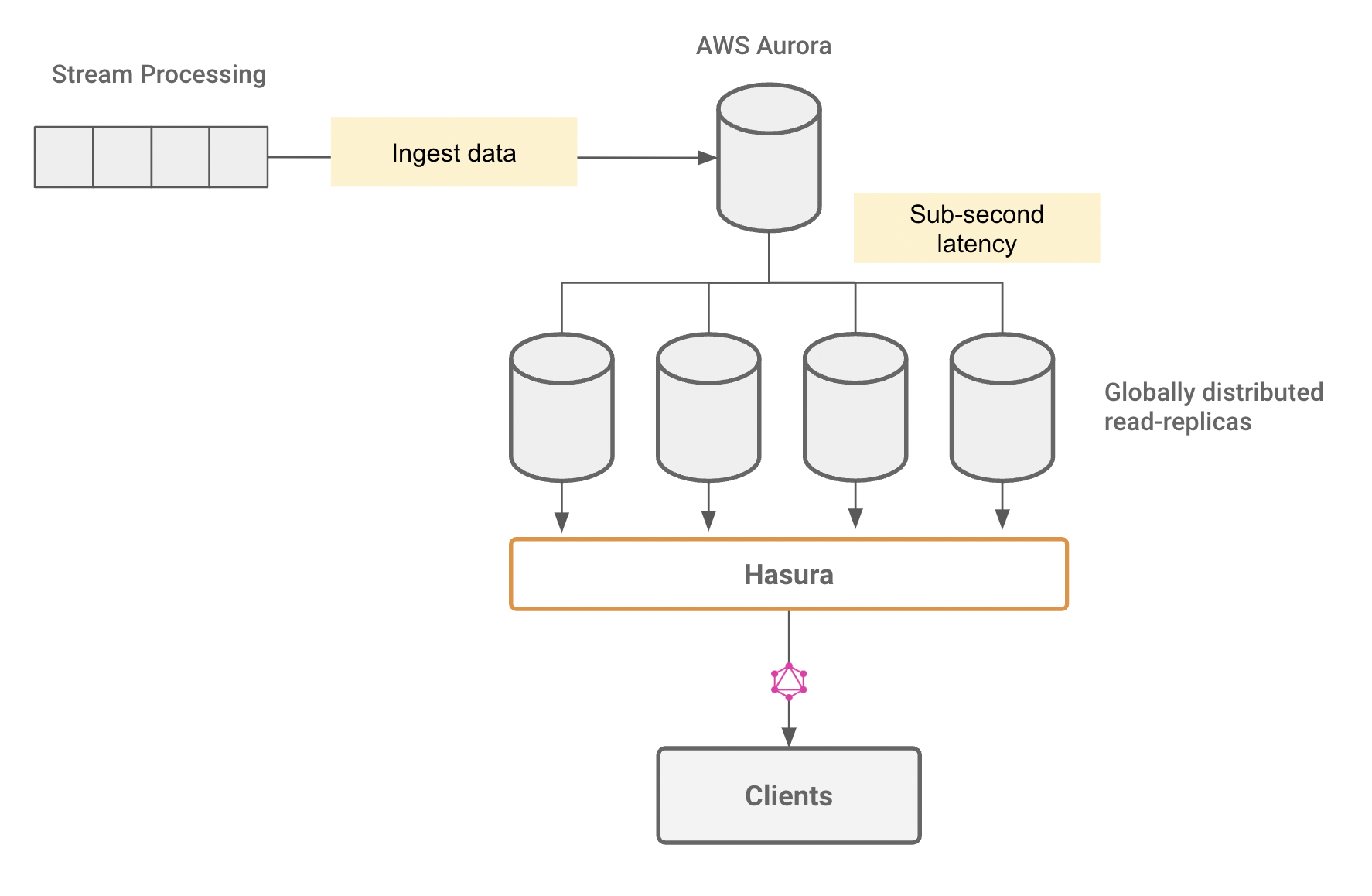 Many use-cases that involve web/mobile clients require an ability to setup a persistent and secure channel that allows clients to publish and subscribe to messages. 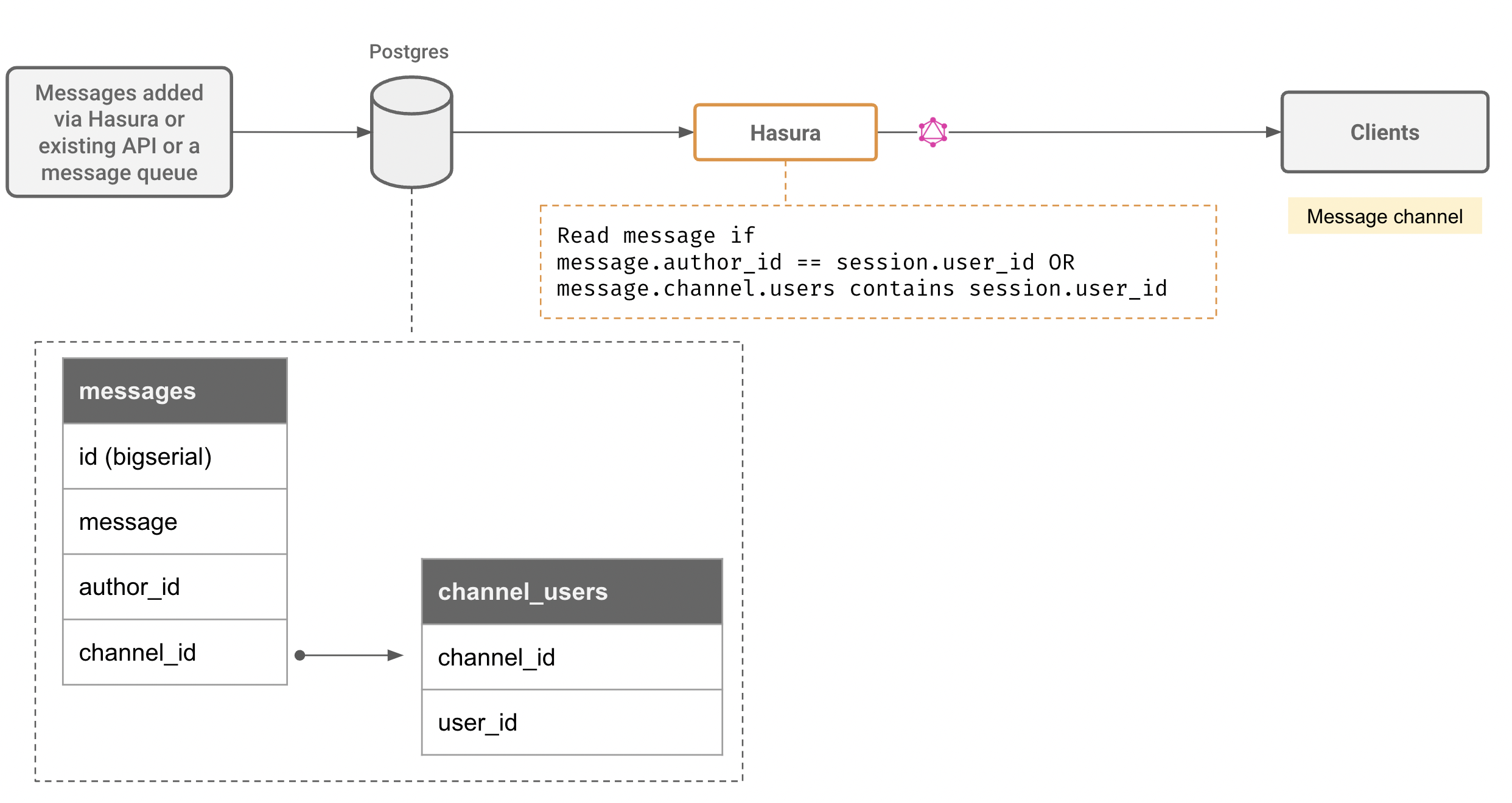 Note: Messaging channels are a great candidate for sharding by channel_id or other channel metadata. Hasura supports YugaByte, Citus with support for Cockroach coming soon.

Capture and stream data changes on an existing table 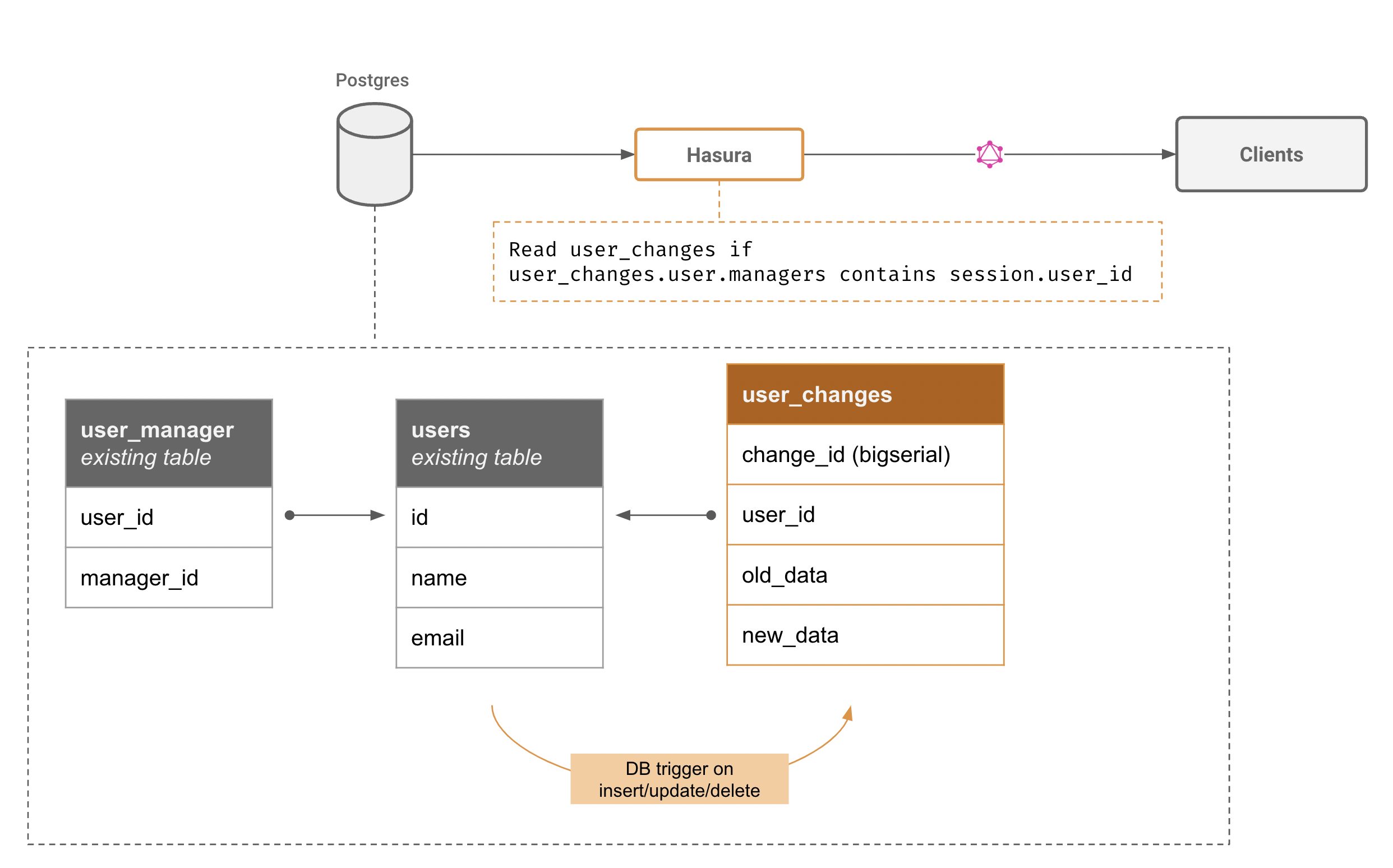 Notes on preventing load on the primary:

Note on capturing data from the WAL: 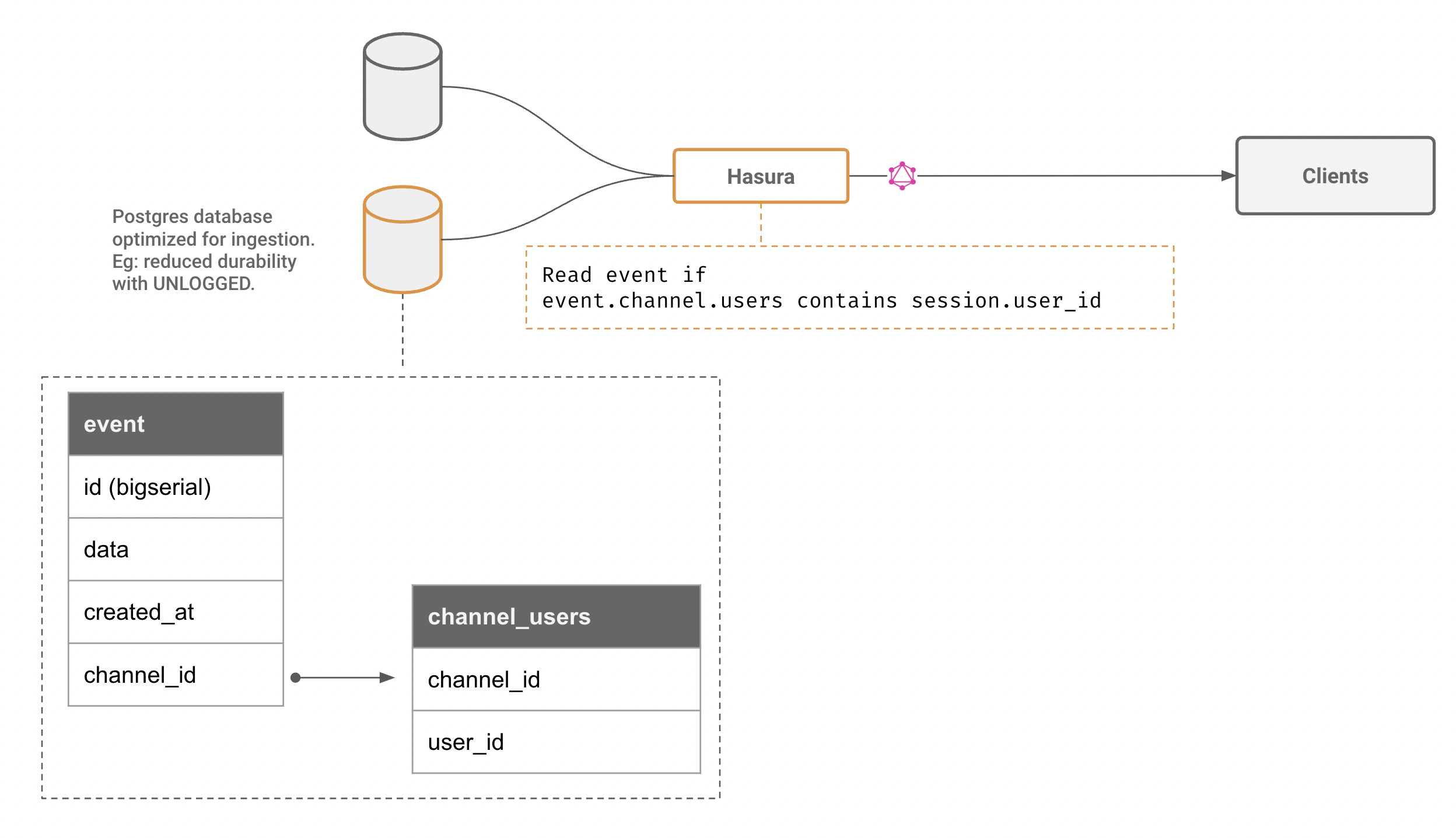 Note: The advantage of using Postgres is that we can leverage its query engine for authorization (via Hasura's predicate push down) and independent cursors per stream. Furthermore, the data retention policy can also be fine-grained and controlled quite easily. Furthermore, given that Hasura allows adding multiple Postgres instances to the same GraphQL Engine configuration, we can tune an entirely separate Postgres server to trade increased read & write performance for data-loss.

Hasura already supports the ability to subscribe to the latest value of a query (aka a live query) over GraphQL subscriptions, which works well for use-cases that don't need a continuous stream of data or events. Eg: the current set of online users, the latest value of an aggregate etc. Read more about how these live queries work in Hasura here.

Streaming however, is a different GraphQL subscription field that is now provided by Hasura, ideal for streaming a large result set continuously or for consuming events continuously in a robust way.

These were the goals and constraints we put on the design of the API:

Before we dive in to the specifics, let us look at how Hasura handles an incoming subscriber, ie. a GraphQL query.

Part of Hasura is a transpiler that uses the metadata of mapping information for the data models to the GraphQL schema to “compile” GraphQL queries to the SQL queries to fetch data from the database.

This gets rid of the N+1 query problem and allows the database to optimise data-fetching now that it can see the entire query.

When there are a multiple connected clients that perform streaming subscriptions, the graphql-engine "multiplexes" subscriptions that are similar.

We can see that even if there are n different subscriptions being run, they all run the same generated parameterized SQL query. The graphql-engine now leverages this by running one single parameterized query with n parameters.

This is done by "joining" the SQL query to an array of id values and the response then returns n rows and each row corresponding to an output to a distinct value of id.

Handling authorization with a predicate push-down

We have seen how Hasura makes performant queries. But what about Authorization?

The naive approach would be to fetch the data from the database (involves IO), apply authorization checks for each element in the response (involes IO and compute) and then send the result back to the client. The problem with this approach is that the initial data fetch is not definitive. The data is being filtered based on rules post the fetching from the database and as data becomes bigger, compute and latency becomes high and so does the load on the database.

It is impossible to load large streams of data in memory and apply authorization rules for filtering data before sending it back to the client. The Hasura approach to this problem is two fold. Make the data fetching performant and make authorization declarative by applying them at the query layer.

We just saw above how the transpiler in Hasura with batching helps in making performant queries. But this in itself isn't enough as resolvers also enforce authorization rules by only fetching the data that is allowed. We will therefore need to embed these authorization rules into the generated SQL.

Authorization when it comes to accessing data is essentially a constraint that depends on the values of data (or rows) being fetched combined with application-user specific “session variables” that are provided dynamically. For example, in the most trivial case, a row might container a user_id that denotes the data ownership. Or documents that are viewable by a user might be represented in a related table, document_viewers. In other scenarios the session variable itself might contain the data ownership information pertinent to a row, for eg, an account manager has access to any account [1,2,3…] where that information is not present in the current database but present in the session variable (probably provided by some other data system).

Authorization is declarative and available at a table, view or even a function (if the function returns SETOF) level. It is possible to create a single SQL query that has these authorization rules added to it as additional predicateds in the query (additional clauses to the WHERE clause).

Backpressure is the mechanism that “pushes back” on the producer to not be overwhelmed by data.

While streaming, it can happen that the server keeps on sending new events to a client while the client already has a huge backlog of events to process. In such a case, when the client is overwhelmed with a large amount of events and is not able to cope up with the events sent by the server, then the client should manually disconnect the subscription noting down the last cursor value. Once the client is ready to accept new events it can start a new streaming subscription from the last cursor value it processed.

Hasura’s subscriptions can easily be scaled horizontally by adding more Hasura instances and can also be scaled at the DB layer by adding read-replicas to the primary database.

We use a similar schema and authorization rule setup as in the "messaging channels" use-case above.

Our aim in this benchmark is to verify that Hasura can handle a large number of concurrent subscribers without undue load on the underlying database.

Here is how the load scales: 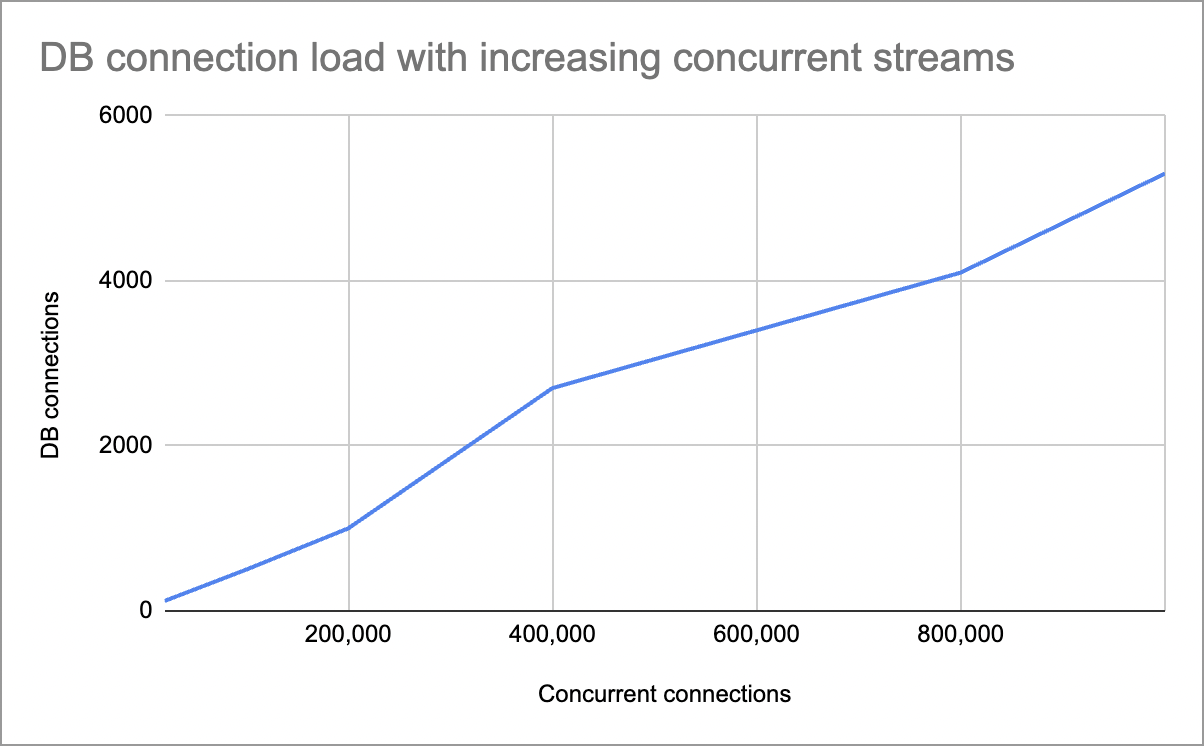 If you have a streaming workload, try Hasura out and feel free to reach out to us for questions, feedback and for any other architectural discussions.